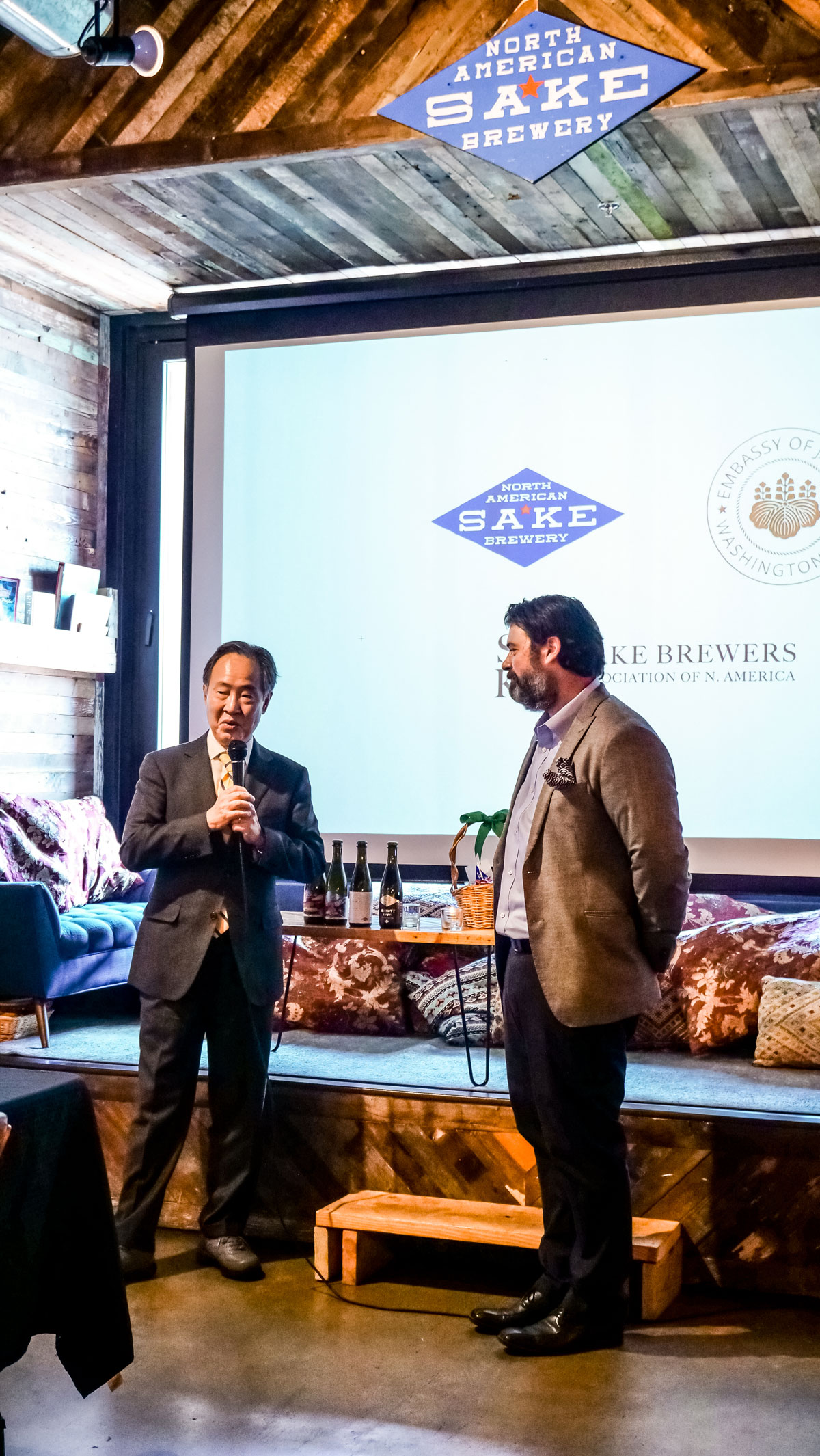 CHARLOTTESVILLE (September 28, 2021) – The Ambassador of Japan, Mr. Koji Tomita, visited and met the staff of North American Sake Brewery (NAS) for a tour of their brewery and a guided tasting of their sake. NAS launched in September 2018 and is Virginia’s first and only producer of sake, the alcohol made from rice. The brewery operates a tasting room and restaurant in the heart of downtown Charlottesville, Virginia where visitors can get tasting flights, food, and tour the facility.

“This visit is an extremely special moment for us and for American-owned sake breweries,” said Andrew Centofante, NAS owner and head brewer, or “Toji” in Japanese. “We are honored to host Ambassador Tomita. We hope to show him our passion for sake brewing and to speak about opportunities to work together with the Embassy of Japan to grow the sake industry in North America.”

The Ambassador of Japan, from the Embassy of Japan in Washington, D.C., visited in the early afternoon on Tuesday and was greeted by the owner of NAS, Andrew Centofante, along with Weston Konishi, President of the Sake Brewers Association of North America (SBANA). Centofante and Konishi hope to build relationships with Japanese sake brewers and strengthen the sake industry here in the United States.

During the visit, Centofante showed the Ambassador the brewery’s new “sugidama” outside the door, a large hanging ball made of fresh green Japanese cedar (or “sugi” in Japanese) branches that is traditionally hung outside breweries at the start of the brewing season. According to Japanese tradition, it is said that once the sugidama changes from green to brown, the sake is ready to drink.

After being seated inside, Centofante and Konishi exchanged pleasantries with the Ambassador and discussed opportunities for furthering communications between the States and Japan and building the sake industry. Centofante shared a short animated film made in collaboration with the SBANA and the Embassy of Japan entitled “The Beauty of the Brew.” The film showed an American man visiting Japan and discovering his love for sake, and then coming back to the States to brew it himself.

“This last year the Sake Brewers Association of North American was proud to partner with the Embassy of Japan to promote the growing sake industry in North America,” said SBANA president Weston Konishi. “We were able to connect Japanese brewers with their American counterparts and have discussions on ways to collaborate, how to build knowledge exchanges, and some of the challenges around importing and exporting products between the two countries.”

Centofante led the Ambassador through a tour of the brewery including the tanks where sake is stored, the large rice steamer, and the “koji mura,” a wooden cedar room where koji is made from rice to make sake. Koji making is a meticulously handcrafted process where a special mold is “malted” onto the rice and turns the starches into sugars, producing fruity to umami flavors, and is used in many Japanese foods including soy sauce.

The group then returned to the tasting room where Centofante led everyone in a tasting of North American Sake. They started with “Real Magic,” a junmai craft table sake, and then followed with “Big Baby,” a cloudy nigori style sake that is actually made from the same recipe. Centofante raised his glass and proclaimed, “Kanpai!” as everyone sipped their glasses, in Japanese sake-drinking tradition. Next they enjoyed “Olympus,” a junmai ginjo craft sake inspired by the 2020 Olympic Games in Japan, to which Smith, Chairperson to the Japan Virginia Society, exclaimed at the smoothness and delicious flavor. Finally they finished the tasting with “Serenity Now!” a junmai daiginjo style craft sake that boasts flavor notes of green apple.

“It was incredible to share our sake with Ambassador Tomita and to see his face light up as he tried our brews. Sake is extremely difficult to make so to have the approval of the quality of our sake is absolutely wonderful.”

After the end of the tasting, the Ambassador of Japan presented a gift to Andrew Centofante for his hospitality, and Centofante returned the favor with a gift basket including a bottle of “Olympus” sake, two tasting glasses, and a bottle opener. The Ambassador joked that he would have drank more had he not had a conference to attend directly after.