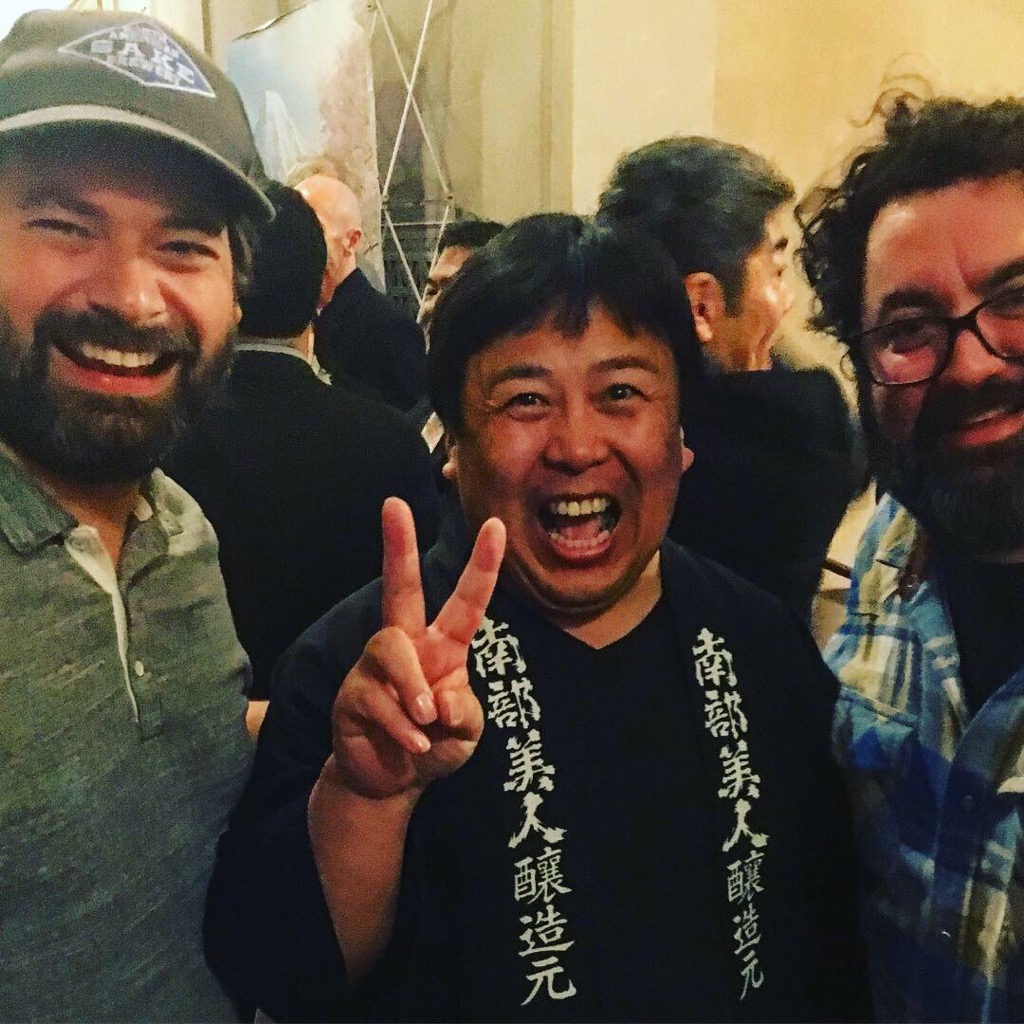 Andrew and I were invited by the Embassy of Japan to attend a private sake tasting at The Smithsonian in D.C. That sentence is pretty surreal to me, its was quite the surprise to be invited to one of the most treasured and prestigious institutions in all of the world for a film on sake and a night of sake tasting.

Our brewery was recently featured in a number of newspapers throughout our region, as well as parts of Asia. Someone at the Embassy must have caught wind, found our website, and sent us an Evite to the event. It was, in fact, as most things have been from our Japanese friends and colleagues, quite thoughtful and generous of them.

We arrived early so we could meet our friend, Bernie Baskin, who lives in D.C. and is helping to form the Sake Brewers Association of North America (SBANA). He was also invited to the event, and the three of us mingled with some of the early invitees. We learned that we’d first watch a documentary called Kampai: For the Love of Sake, which features three men living in Japan whose lives are deeply entrenched in the sake world. They are John Gauntner, known as the “Sake Evangelist” and a teacher of ours when we became Certified as Sake Professionals; Philip Harper, the only non-Japanese toji (head brewer) in a Japanese-based sake brewery; and Kosuke Kuji, an effervescent personality and fifth generation toji at Nanbu Bijin Sake Brewery. Kuji was in the building for the event.

The screening was packed, so packed that we learned 30 to 40 people had to be turned away. After the film, Kuji hopped on stage and gave an enthusiastic speech about his love for sake. It’s hard to not be inspired by his vibe. He is a force of personality in the best possible way. Then, we all convened to the Freer Gallery of Art hallways where nibbles were served and several stations of kimono-wearing servers poured cold, craft sake to the parched throng. It was hard not to feel a mix of excitement for how many people were at the event, but also a bit like a sardine for how many people were at the event. Nonetheless, if you stuck your hand out far enough towards a filling station it would return to you with either snacks or sake. We did this

Members of the Embassy made their rounds and were incredibly pleased we made the trip. The Ambassador wasn’t present, but many of the key members of his staff greeted us. It was as warm a welcome as one could have enjoyed. We exchanged business cards and pleasantries and made plans to visit one another. Maybe we would even work together soon?

We had to leave the event early due to the long drive home and there was a slight tinge of sadness coupled with that intoxicating buzz of having made new friends. On the drive, we talked about the future of our business and what exciting prospects lay ahead.

We got home well after midnight and only had a brief night’s sleep because there were things to do early in the brewery. The next morning was a bit of a blur. Andrew turned some Zeppelin up loud and got to work. A few hours into the day – maybe about 10 a.m. – I noticed a young Japanese couple had walked into the tasting room. They looked lost, and I asked if I could help them. The smiling woman approached and said, “We’re from the Embassy.”

They had been sent to purchase bottles of our sake to bring back to the Embassy of Japan. It floored me this continuation of friendship, this incredibly kind gesture. We tried to give them a case of sake for free, but they wouldn’t accept it. We found some middle ground, and I walked them to their car. I noticed it had Diplomatic license plates, and I thought that was cool. These two young people delivering a case of North American Sake Brewery sake back to their bosses. Maybe they’ll drink it at a party. Maybe the Ambassador will be there. Maybe they’ll even think it’s pretty good.