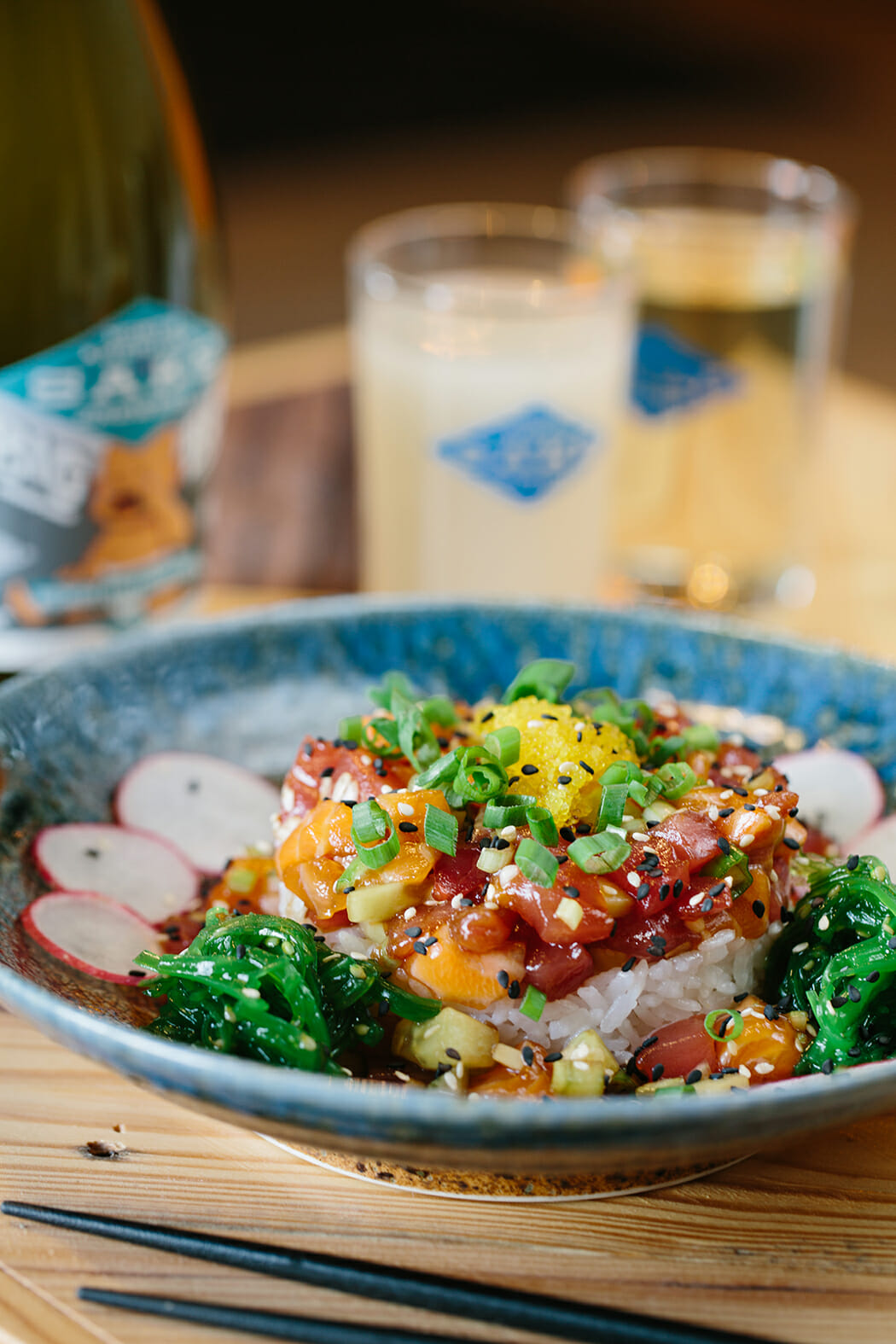 Now, after a slight lull, the area’s restaurant scene is resurgent, with a burst of openings in the past 18 months. The 10 we feature here are all good, and a few are exceptional. But what stands out as much as their quality is their variety. A bicycle bar. A lavish steakhouse. Tibetan food. A sake brewery. A pie shop with tapas. Greek fast-casual. Mexican- and Spanish-inspired cuisine. Thai. Korean. Nearly every new entry has given Charlottesville something it lacked. While our area’s restaurant scene has long punched above its weight, the latest additions remind us that even in the best food communities, there’s always room to grow.

* What makes a new restaurant “hot?” In a word, popularity. Whether it cooks with gas or a wood-fired oven, a restaurant that draws a crowd soon after opening—particularly in a city with so many options for dining out—is hot. Please write to joe@c-ville.com with comments. We welcome, nay, encourage debate!

Before the chain Cava was born, its three founding owners ran just a single full-service Greek restaurant in Rockville, Maryland, Cava Mezze, which they launched in 2006. From there, the owners—all first-generation Greek-Americans—took the red-hot concept of fast casual and applied it to the food of their birthplace. The result is a rapidly growing chain that now has more than 70 locations. Guests line up at the counter, survey an array of greens, grains, Greek spreads, meats, and other toppings, and then point away to build their own bowl, salad, or pita wrap. At the Charlottesville outpost, there is little evidence that expansion has diluted quality. The owners’ passion for good eating and well-sourced ingredients is unmistakable.

The owners of the popular Thai Cuisine & Noodle House noticed a lack of Thai food south of town, and filled the void with their new restaurant in The Yard at 5th Street Station. In addition to the standard menu items of many Thai restaurants—pad thai, pad kee mao (also called drunken noodles), massaman curry—Chimm makes a point of featuring less common dishes, like Isan Style Som Tum (papaya salad made with fermented fish sauce) and Bah Mee Haeng (dry egg-noodle bowl). As diners become accustomed to the unusual dishes, Chimm plans to introduce more and more of them. Keep an eye out for occasional lunch banh mi specials, which require reservations and always sell out in advance.

If you’ve never had Tibetan food before, Druknya House is a great place to start. Hearty starches like barley, noodles, and potatoes dominate the food of a region known for mountains and wintry weather. Though Tibet has a cuisine all its own, its closest cousins are the foods of Himalayan neighbors, such as Nepal and Northeast India, with flavors like ginger, garlic, and turmeric. Yet, because the spicing of Tibetan food is often restrained, it’s approachable for most diners. In the kitchen at Druknya House is Lobsang Gyaltsen, a monk who studied Buddhist philosophy for two decades before turning to cooking to pursue an interest in healthy eating. While his menu does include unusual foods like chilay khatsu (spicy braised cow’s tongue), much of what Gyaltsen makes is comforting and restorative, like soups, noodle bowls, and Tibet’s beloved momos (dumplings filled with beef, chicken, or vegetables).

In partnership with Oakhart Social, chef Ryan Collins has brightened the former service station on West Main where other attempted restaurants have gone dark. From high-top tables, guests can now whet their appetites by gazing into the hearth where much of the food is cooked. The menu borrows from Spain and Mexico, two countries whose cuisines Collins came to love during eight years working for celebrity chef José Andrés, including three as head chef of the Washington, D.C., Mexican restaurant Oyamel. With small plates and large family-style platters, Collins intends all of his food for sharing. New York City transplant Joel Cuellar, a veteran of the spirits and cocktail industry, ensures that the bar does justice to the quality of the kitchen.

Tread lightly when remaking a former restaurant beloved by regulars. That’s what first-time restaurant owners Bert Crinks and Elaina Mangione have been doing since moving from northern Virginia to Charlottesville and buying the Italian-American restaurant Bella’s. Aside from a new name, changes have come gradually. The wood floors have been refinished and the walls freshly painted, but most of Bella’s menu of family-style Italian-American dishes remains the same, now joined by weekly specials from chef Mick Markley (formerly of Mas and Lynchburg’s Emerald Stone Grille).

This is not your old-school mom-and-pop place. In the former home of Eppie’s restaurant on the Downtown Mall, industry veterans Steven Kim and his wife, Kay, have created an airy, contemporary Korean restaurant with an open kitchen and exposed brick walls. The menu also is modern, combining traditional Korean dishes like bibimbap and kimchi jeon with modern flourishes, like the use of melted cheese, a fairly recent phenomenon in Korea. There’s even a (delicious) bulgogi steak and cheese.

Food was not the first thing on the minds of owners Jeremy Goldstein and Andrew Centofante when they prepared to open Virginia’s first sake brewery last year. But when Culinary Institute of America alum Peter Robertson, of famed local food truck Côte-Rôtie, came on board as chef, he proposed creating a menu of Japanese-style small plates designed to pair with sake. The food does much more than complement the wine—it uses sake as an ingredient, too, along with brewing byproducts like koji, a mold prized by chefs for its ability to transform flavor. Though Robertson has moved on, he leaves behind a menu he helped to create and a kitchen run by his former cook Don Van Remoortere, a certified BBQ judge who marries American smoking techniques with Japanese flavors.

Chef’s pick Diamond Joe Brisket Platter ($16): Slow smoked prime beef brisket rubbed with ground espresso beans, Szechuan pepper, and sea salt, served with a side of soy “jus.” “The power move,” says Remoortere, “is to order it with two steamed bao buns with a side of housemade spicy sambal and a heap of kimchi to make a pair of towering brisket sammies.”

Who knew that Curtis Shaver’s three passions would go together so well? The Hamiltons’ chef emerged from the kitchen last year to help turn a classic-car sales and service shop into a tavern celebrating a few of his favorite things: beer, bicycles, and sandwiches. Part pub, part sports bar, part bicycle shop, Peloton Station showcases the type of over-the-top sandwiches that earned Shaver a following at Hamiltons’ “sandwich lab.” Draught beers and wines are well chosen, and there are plenty of TVs to entertain you while you eat, drink, and wait for your bicycle to complete its tune-up.

No recent opening made a bigger splash than the Lampo team’s steakhouse in the former Bank of America building on the Downtown Mall. In a stunning room with soaring ceilings, the featured product is one rarely seen: local, heritage beef, dry-aged 60 days or more. Beyond the steaks à la carte, there’s a separate menu of cheffy salads, pastas, and entrées from a talented kitchen staff led by Ian Redshaw, a James Beard Award semifinalist in the 2019 Rising Star Chef of the Year category. While Prime 109’s steak prices range from roughly $25 to $85, pastas and other entrées—also excellently prepared—are less expensive, and an ever-changing bar menu offers inspired sandwiches and snacks Monday through Wednesday. Along with well-chosen wines, there’s a serious bar program for cocktail enthusiasts.

When the local institution Spudnuts closed in 2016, its prime location at the gateway between Belmont and downtown instantly became one of the more coveted restaurant spots in town. The prize went to former Mas tapas chef Tomas Rahal, who converted the timeworn space into a bright, colorful pie shop. While the pies are stellar, the restaurant offers a whole lot more, with a menu that changes throughout the day. For breakfast, there are egg sandwiches, tarts, and papas bravas; at lunch, soups, salads, and creative sandwiches like a grilled octopus banh mi on charcoal bread; and, in late afternoon and early evening, wine, sherry, and tapas, like boquerones and bacon-wrapped dates. Plus, regardless of the hour, you can drop in for Rahal’s excellent breads, pastries, and other baked goods.