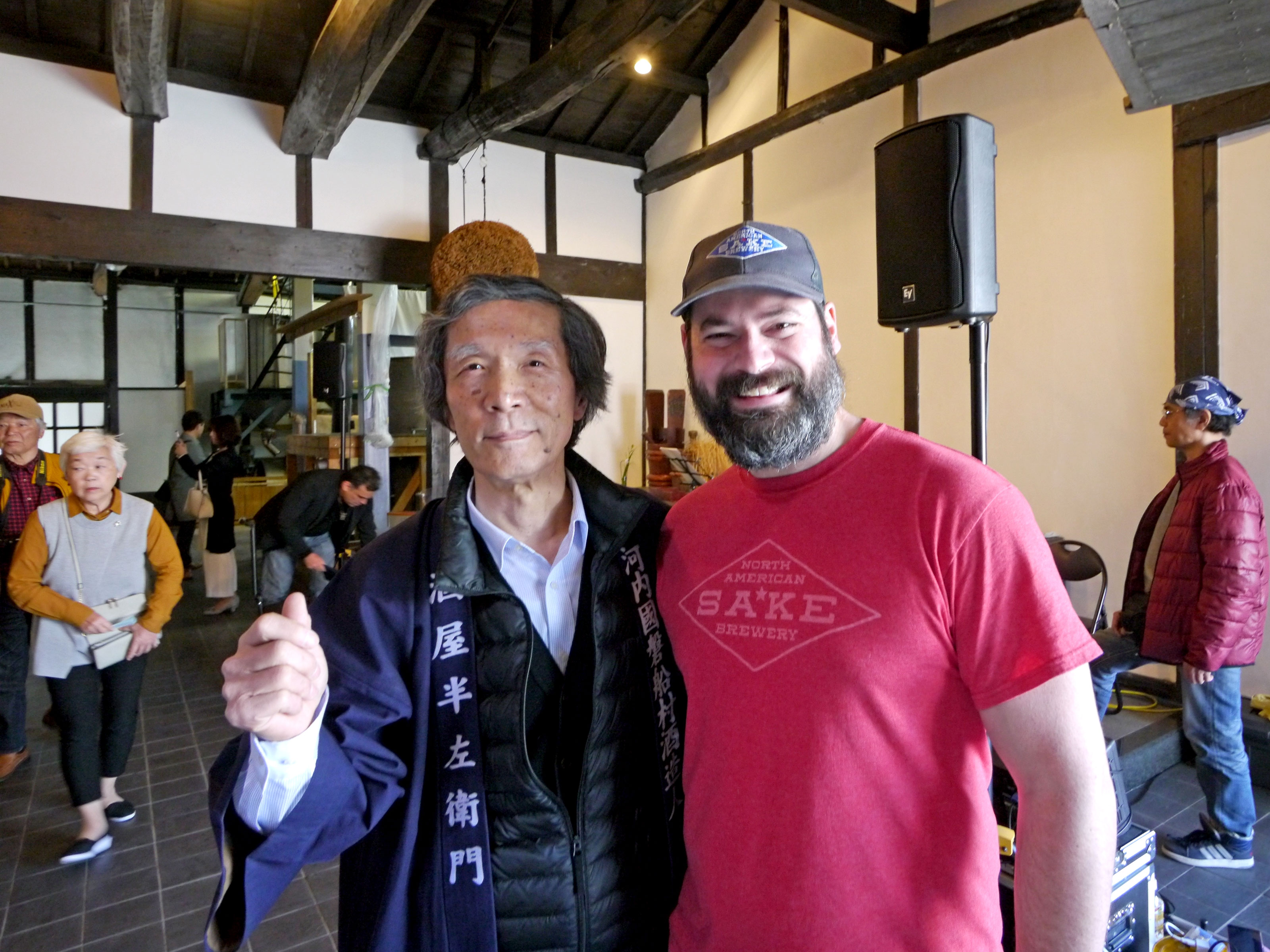 “If you can find a flight in the next three weeks, we would love to host you.” This was part of a conversation with Marcus Consolini, CEO of Daimon Shuzo, a famous 200-year-old brewery in Japan. I had reached out to the brewery to see if there was any opportunity to connect, and they enthusiastically responded that I should come help them finish out their brewing season. This season in Japan lasts from the beginning of October through March because sake is traditionally brewed during the colder winter months. If I didn’t come then, I would miss all of the action. So I talked to my wife, booked a flight, and by the next weekend was heading to Osaka.

I arrived at KIX about 22 hours later, jet-lagged, nervous, excited. I took a train from the large bustling city of Osaka to the sleepy region of Katano and, once there, I walked down the street with my luggage and up to the brewery gate. Daimon (大門) means “large gate”—and there it was: a beautiful old wooden door where Marcus greeted me. Marcus is larger than life, an American from NYC who left for Japan in the ’80s and has stayed there ever since. He had a background in finance and found an opportunity to help revive this historic brewery back to its previous glory.

We crouched through a smaller wooden door next to the big gate into what felt like a painting —a 300-year-old Japanese garden in the courtyard of the original Daimon family house with perfectly manicured trees and shrubs, meticulously placed rocks and boulders, and pathways to framed scenic views. I walked to the center and tried to take it all in. Daimon Yasutaka, the owner and head brewer, came into the garden and welcomed me to his home. It was truly a mind-blowing moment to be in such a historic place for sake with a true master of his craft. He brought out their sake, and we sat and talked about how we came to this moment and how sake had changed our respective lives. We chatted about the history of the brewery and how Daimon-san, the owner, was a unique figure in the sake world. He is the sixth-generation brewer, but was an avid traveler in his youth and learned English. This gives him a unique global perspective. He believes that sharing knowledge and passion is a beautiful way to show the world the wonders of sake. Oh, and he makes absolutely delicious nuanced and varied sakes. Daimon specializes in bringing out umami-rich flavors in his art, suited perfectly with regional Kansai cuisine. After our visit, Marcus showed me to my room, a small space in the attic of the old kura, and I retired for the night, ready to start work bright and early.

The next morning, I headed into the main brewery area and wandered around a bit before I figured out where I was supposed to be. Large old wooden beams reached to the wooden roof of the original brewery and smaller passages stretched out connecting different areas of the brewery. There was a place for steaming rice, a place for pressing, a room for tools and cleaning, a cold storage area filled with large tanks, and a place for bottling and shipping. There was a concrete building toward the end that housed the koji-mura, the lab, and a small break room for meetings and lunch. This was where I was introduced to the team and would spend time trying out my Japanese and sipping instant coffee. The main toji, Uei, was younger, closer to my age, and he gave out the marching orders for the day and would really show me the ropes.

The days would be full of measuring rice, washing, steaming, and working the koji. The work was always done at the perfect pace and timed perfectly. Washing rice was a beautiful display of timing. We had a lot of rice to prepare, but it was broken into small, manageable amounts. The rice was put into the washer, then moved over to be soaked for the perfect amount of time, as other rice that had been soaked was drained and weighted. This well-orchestrated cycle would then begin again.

We steamed rice in the mornings after preparing it, and the kura would fill with steam as it flooded out above the steamer. We then moved the perfectly gelatinous rice to the cold room to let it cool quickly and then brought it up to the koji room, again in manageable amounts. The koji room is kept warm and slightly humid and is where a lot of time and energy is spent helping the koji grow just right. This was a true honor to be a part of as we spread the koji out and I helped to carefully put the spores over all the grain. We piled it into a large mountain and wrapped it up tight, the next day separating it into boxes and watching the temperature and humidity.

Uei and I spent time in the lab working on fermentation management. We carefully tested the alcohol levels, did titrations to determine the acidity, and measured the density of the sake as it progressed. He would make decisions on what needed to be done to keep the fermentation and flavor profiles right on track.

All this labor-intensive work brought together beautiful flavors and aromas—ones I was familiar with, but seeing it in a new light helped me to gain confidence in my skill and knowledge. Small moments of clarity, of technique, of efficiency filled my head, and it was amazing to know we are doing similar work halfway around the world.

Lunch time and the hours after brewery work had wound down for the night were always a treat, because that is when I was able to sit down with Daimon-san and ask high-level questions about how he approached his sake, what he felt was important, and what I should focus on. He, just as inquisitive, would ask questions about American sake and what our experience had been like. One particular evening, we were sitting in the garden and chatting about the importance of putting your energy and chi into your sake making. How the elements of water and rice, the living cultures of koji and yeast, work together to make something beautiful—that you are there to guide them and nudge them to where they will most greatly flourish or reach the desired result.

After almost a week of working with the team, there was a company-wide celebration called Hanami. This is a tradition in Japan where people sit under a cherry blossom tree and celebrate the transient nature of the blossoms and the petals falling to the ground. This was where I would present the sake I brought from NAS to their team. It was probably the most nervous I had ever been. After working so closely with these guys and tasting such wonderful results, would my sake stand up? I poured them samples of Real Magic, Big Baby, and a special new brew I had been working on called Serenity Now. With bated breath I watched Daimon-san take a sip and was filled with relief when a smile washed across his face. He complimented its smoothness and its balance and acidity. Marcus also was impressed and affirmed that our sake was indeed very good, some of the best he had tasted from the States. I was even more encouraged to keep going and to improve my sake brewing. We headed back to the brewery for food and more sake, drinking and relaxing together as a big brewing family. Later that night, Uei approached me and said, “You have such passion, you are a true toji, and I wish you the best of luck in your brewing.”

I finished the week out working with the team, grabbing every bit of knowledge and hands-on process experience I could. Daimon-san had a few gifts for me, including some lab equipment to help fine tune some of our processes. I embraced both Marcus and Daimon-san, thanking them for welcoming me into their home, for allowing me to share in this passion of sake. I feel truly blessed to have been given this opportunity. It will be one I remember for a long, long time. The world of sake is full of wonderful people and places, moments and conversations, and I love being a part of such a historic and beautiful drink. Kanpai.