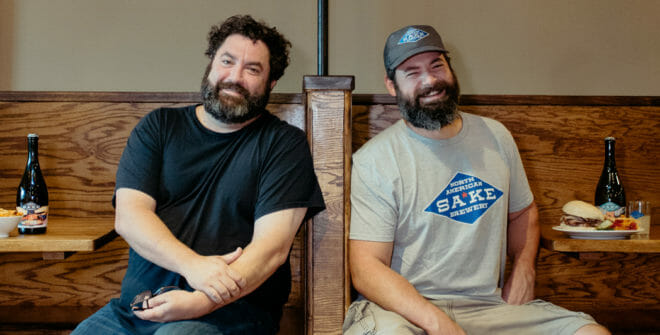 For North American Sake Brewery co-owner Jeremy Goldstein, it wasn’t a trip to Japan but a visit back home to California that inspired his new venture.

“I’d never had ‘craft’ sake, but I went to this amazing restaurant with a sake sommelier and had a whole different experience than I’d had before with the heated stuff, or sake bombs,” he says. “It was like drinking a really nice craft beer or craft cocktail.”

The experience lingered in his mind, and once back in Charlottesville he mentioned it to his friend Andrew Centofante, who’d dabbled in brewing.

The two sought out some good bottles of sake, and Centofante says it was love at first sip. “One night, maybe I drank a couple too many and I looked at the glass and I looked at Jeremy and said, ‘how do you make this stuff?’”

Centofante researched some home-brew recipes and started cooking it up in his basement. He gave the first batch to friends, who enjoyed it, then brewed another, and another. “I had two batches going at once, then three and then five,” Centofante recalls. “It was then Jeremy and I decided this was a cool thing we liked doing and could be a unique opportunity for a business.”

The men then visited every U.S. sake brewery they could find, 14 in total. “There are so few of us, it’s kind of a niche crowd,” Centofante says. “It’s nice to be able to talk to others about the brewing process and learn from them.”

Goldstein says they were thrilled to find a space at IX, and business has been booming, with over a thousand patrons coming through during the recent Tomtoberfest event. Luckily they had plenty of sake on hand.

“We go through about 6,000 pounds of rice every month,” Goldstein says. “We’re one of the larger independent sake brewers in North America and we have a lot of different types, including the traditional unfiltered, or cloudy, nigori style, and infusions with fruit and peppers.” There’s even a new, hyper-local variation made with pawpaw foraged from the Monticello trail.

To compliment the drinks, the pair have brought in chef Peter Robertson, who with his wife, Merrill, owns the popular Côte-Rôtie food truck (which Merrill is now operating on her own). Goldstein says Robertson has long had a passion for Japanese cuisine.

“He’s bringing a little Southern style and American style to his cuisine, just like what we’re doing with the sake,” he says. “We have a 330-gallon smoker, so we do Asian smokehouse and our own pastramis and pork. He makes fresh bao buns daily, and we do rice bowls.”

Centofante, who worked in branding before opening the restaurant, has enjoyed applying those skills to the business as well. “Not only do I get to be very hands-on and physical in making sake, but I get to make my own brand and guide my own brand,” he says. “I get to flex different muscles in my brain.”

He wants to help customers discover a new side of sake, the same way he did: “Let me open your eyes to this wonderful beverage that is historic and culturally significant,” he says. “And hopefully you’ll fall in love like I did.”